Get fresh music recommendations delivered to your inbox every Friday.

from Guru Legacy EP by The Beast 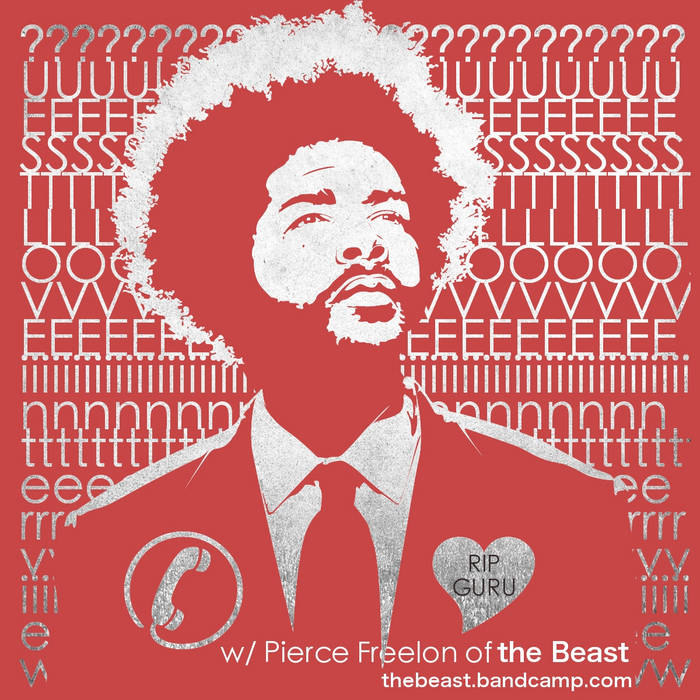 Exclusive interview with ?uestlove of The Roots and Pierce Freelon of The Beast.

Pierce Freelon: Can you talk about Guru’s legacy? How did he bridge the gap between jazz and hip-hop with Jazzmatazz and also his legacy with Gangstarr? What are your reflections on his passing away last April?

?uestlove: For starters Guru’s voice is very velvety smooth so you would need something that is a jazz background or a jazz canvas for Guru to–sort of–paint his colors on that easel.

So I’ll say that the first artist was actually Jazzy Jeff who introduced the idea of sampling jazz and hip-hop breaks. He had a song called “A Touch of Jazz”, it came out in 1986, where he just basically took all these jazz samples from Bob James and Grover Washington–basically all the CTI jazz stuff–and started using that as the basis of the song.

But I will say that I’ve always seen Guru as – kind of like a trumpet. It’s funny that he’s deep into that jazz tradition. But Guru was never minstrel and that’s what really set Guru apart from most of the other people in the hip-hop culture. Because hip-hop was all about bravado and a bunch of exclamation points after your presentation, which basically rendered most of the people in hip-hop sort of one dimensional. No so much with Guru. He wasn’t a caricature–very cool, very laid back. He appeared as every guy. He never bragged about what he had and what he didn’t he was more about teaching lessons and showing you reality. There’s a lot that we can learn from Guru. That’s how I see him.

Pierce: Word. So you guys did Dillatude (DillaTUDE: The Flight of Titus) which was a beautiful libation to J Dilla on your (album) How I Got Over. Robert Glasper also did a J Dilla tribute, J Dillalude on his album In My Element. I know you were featured on Double Booked, and Glasper has played with Phonte who is someone you’ve collaborated with. I just wonder, is there a new jazz renaissance going on right now in collaboration with Hip Hop?

?uestlove: There definitely is. I see all The Experiment. I see Glasper, Hodge, Dave and Bilal–can’t forget him. Basically all the people in that movement, I see them as pretty much the next progressive movement. Right now, I just call The Experiment pretty much the most dangerous musicians alive. The chemistry that they all have together just gets better and better every time. They’re, to me, the updated version of…they’re promise of what Miles Davis’ classic quintet of Hancock, Carter, Shorter, (Williams) and Davis. They’re sort of delivering on that promise. I kind of see them as that classic quintet–meets Dilla, you know? I actually consider them more jazz than hip-hop. If The Roots were hip-hop with jazz sensibilities, then I consider them jazz with hip-hop sensibilities.

Pierce: What is the importance of having a political or socially conscious message in one’s music? Does The Roots consider themselves a conscious or socially responsible band with the music that you put out?
?uestlove: Well, I see us always as a work in progress. A lot of people mistook our positioning, which they always deemed as socially conscious. I mean, we were politically active in our everyday lives. Our first few records were about emceeing and the art of emceeing. Whereas now, it’s really hard to sort of fit in that mold especially when 40 is around the corner. With 40 around the corner, you tend to be – especially, like, most of us have families now and we know that people are listening, and really I’m rather shocked that I figure that the harder that times get hip-hop will come through in the clutch. Teach us a lesson that uplifts us just like it did in 1987-88. But, apparently not. The exact opposite happened. I don’t believe in the whole idea of musicians as role models. But I am well aware that some people use our music as a means to search for some answers or search for some inspiration. I would be remiss if said that didn’t play a part in the thinking process of how we make music. As we mature in our age, we are becoming more and more responsible.

Pierce: Word, my last question, as we discussed, I’m in a band called The Beast. We’re a live hip-hop quartet and we’re definitely inspired by the work that Guru did, definitely inspired by the work that The Roots does. There’s not a live band in the country that doesn’t look up to The Roots. Specifically, like, hip-hop bands. We’re your nephews and nieces out there. How would you advise us? What’s a useful gem you could drop on the young brothers and sisters out there that are grinding, making music?

?uestlove: Well, you know, here’s some crazy irony for you. I heard the collective jaw drop when I announced that we were retiring from the road and relocating to 30 Rockefeller Plaza in New York. Of course I had my guards up the first two months being here at NBC. But a funny thing happened. On the way to the 6th Floor of the 30 Rockefeller Plaza Building, we discovered something that we pretty much never utilized before in our entire history. The Roots actually rehearse on the daily, which is kind of hard to believe, with all the acclaim that we’ve gotten. I’ll be shocked if you could name 10 times that The Roots rehearsed between 1993 and 2009. Far and few between rehearsals. Even when it’s time to do new material off the record, It’s pretty much like, I’m on stage and I’ll call it out: ‘alright. two. three. bam. Go right into the song. That said, sorry I’ve been up since 6AM. That said, I will say that I’ve been reading Malcolm Gladwell’s Outliers book. A book I highly recommend to everyone including fans because he breaks down the genius of The Beatles. The genius of The Beatles really doesn’t have to do with the fact that the stars were aligned and God blessed these guys with the gifts of melody and of words more than anyone else. The gift of The Beatles is the fact that they actually rehearsed.

They had a steady gig in Hamburg, Germany before they became The Beatles, before the breakout, the British Invasion. Between 1958 and 1962 when they got their record deal, The Beatles played together everyday for eight hours a day without fail. Eight hours in Hamburg, Germany at a strip club–Christmas too. If you imagine investing in eight hours of play with your band on January 1st, January 2nd, January 3rd and so on and so on; and February and March and so on; and June and July and so on; then the next year, and the next year, and then 10 years later–that will probably be more beneficial.

It’s basically (been) a year and some change right now and I’ll say that just now, do I feel–I almost feel so ashamed, like I’ve slighted people for the last 17 years. Because now I’m wondering like, damn, what could have been? If we all just practiced everyday for 3 hours a day what would have happened?

Gladwell in the book basically says that perfection and genius becomes and starts when you reach 10,000 hours of practice. That’s where he breaks down Bill Gates’ genius. The fact that Bill Gates spent 10,000 plus hours in college inside of his computer lab which led him to invent the PC. He breaks down certain soccer players, how many hours they practice a day and that type of thing. He broke down The Beatles, he breaks down pretty much everyone that’s applauded in history. You go in thinking that this person is just naturally genius and then you leave saying, “Wow if I just put in 8 hours of practice a day, that could have been something.” That’s pretty much my advice.
Even if you feel as though, like “we play this song every night so what’s our motivation for doing it here.” I don’t know but there’s this feeling that you get once you a song under your thumb for so long that once you’re on stage it’s like second nature. Then you able able to elevate the performance of the song. People still (confuse) entertaining and performing a song. It’s easy to perform a song, it’s just doing the song that you wrote. It’s another thing when you entertain. It all starts with practice with me. That’s important.

Pierce: Word, thanks so much.

?uestlove: You’re welcome. Sorry man it’s been a nightmare with these records and we’ve been doing this damn job man, it’s so crazy.

Pierce: No, it’s all good. Thank you so much for your time.

from Guru Legacy EP, released May 2, 2011
Pierce Freelon, ?uestlove, music by The Beast